According to various religions, karma is a transcendent energy (invisible and immeasurable) which is derived from the acts of individuals. Agile also has its own karma which is divided into 6 levels. Each of these offers a different kind of “energy” which is translated into a specific and unique type of feedback loop.

Agility requires the 6 levels implemented and operating effectively to continuously grow into a healthy and unstoppable eco-system. 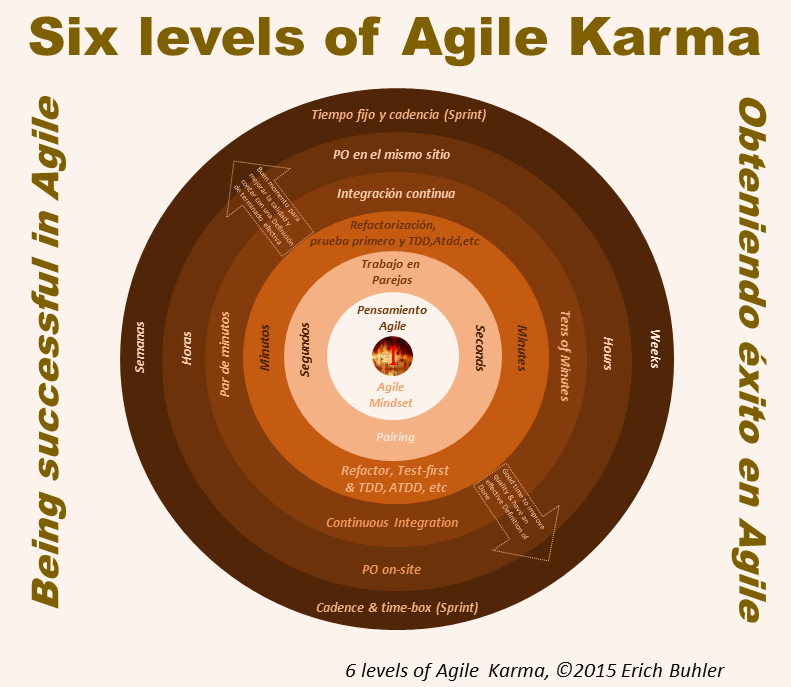 The level zero is what I call Hell or Inferno. In here, the focus of the whole organization is set to push for deliveries at certain dates without seriously considering business value as an evolutionary process. This mentality brings a drop in quality, the creation of a pool “resources” that will make employees slaves of products, bunches of unstable code and products that will not fully satisfy the customer. This will also cause uncertainty about the completion of products by certain dates, thing which will fuel a bigger vicious circle of unintended consequences.

Karma Level 1 implies the adoption of the Agile mindset. Under this energy, people have an internal feedback loop where the customer is placed first and in the centre of the universe. Understanding how to deliver value to them is the primary objective of this kind of energy. This “energy” places also the focus on the effectiveness of a perpetual cadence to  deliver business value and the use of honest and face to face communication. This level of innate feedback occurs in the conscious area of the brain related to decision-making -and is the fastest one-.

Karma level 2 focuses on the use of work in pairs 24/7 (pair programming).This technique has been shown that not only help teams share and retain knowledge within the group but also empowers them to validate and make better design decisions. This  promotes a sense of collaboration on its various tasks and reduces code “paternity”, reinforcing individuals to explore different options based on its diverse points of view. This kind of “energy” should be mandatory on times where software complexity has raised exponentially. This circle enables a feedback loop to the team in a matter of seconds.

Karma level 3 focuses on refactoring, writing tests first and Test-Driving-Development (as also as acceptance tests or similar). TDD is a disciplined practice where teams write the evidence that will support a hypothesis before writing the implementation itself. TDD helps create a structure which facilitate changing the application quickly as well as reducing defects and increasing reliability and code quality. Here the feedback loop occurs in a matter of minutes.

Karma level 4 of karma focuses on breaking a pattern typically found in traditional software companies: integration of the components of an application at the very last minute or when the project is almost done. When continuous integration is used, this process is often carried out in a matter of hours. This helps teams lower the risks of integration and eliminate potential periods of stabilization. Using continuous integration activates a  feedback loop which helps analysing  all the code as a whole, thing which occur within tens of minutes.

Karma level 5 becomes in place when the Product Owner is collocated with the team. This helps the group obtain support and questions answered in a maximum of hours. This creates a feedback loop which increases the level of communication related to the product, thing which will decrease the times from days to hours.

Finally, the Karma level 6 keeps the team focused by using a time-box. This allows an  effective flow of information and feedback loop from clients/stakeholders (Stakeholders) in weeks rather than months. This energy will re-affirm the cadence and prepare effectively people to future demands, thing which ultimately strengthen the nature of evolutionary software.

The 6 levels of Karma  must be adopted effectively and in full in companies wishing to move into the Digital IT world and Agility. The fact that one does not exist or is not addressed in full will hinder the company growth towards the creative economy and the steps  towards being a continuous learning organization.

Have in mind that any effect on the lower levels exponentially affects the upper circles. Because the feedback loop times are different inside each circle, the consequences will be seen deferred in time, thing which will increase system complexity and complicatedness. In the event of that happening in a traditional company, people will tend to focus on solving the a problem -resulting from the action in the past- rather than addressing the root/real cause.

This last thing is generally seen in immature companies without continuous improvement. In there, any fault on the inner circles will be addressed by adding new processes or controls to alleviate the system imbalances. The result will be an  increase in complexity and complicatedness and  establish a bigger vicious cycle which will destabilize the other areas.

As you can see, the 6 levels of Karma help teams and companies find a way to self-evaluate and improve themselves. Having in mind the circles in this way will also help understand the effect of the actions and connection between them and the different timings.

In which level of Karma is your team or company currently now?